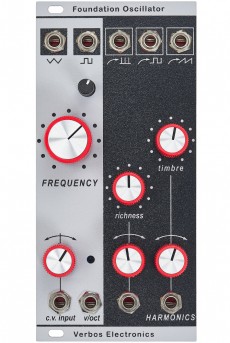 It is based on the same discrete transistor core as the other Verbos oscillators. In addition to outputs for the Square and Triangle waves directly from the core, there is a brand new multiplying waveshaper giving the effect of a VCO in hard sync with the core. Furthermore, there are three outputs that fade between Sine and Saw, Square and Spike (a Buchla Music Easel classic).

In other words, there is a “Richness” control that multiplies the Saw, Square and Pulse and a “Timbre” control that fades from Sine and the richer multiplied waveforms.