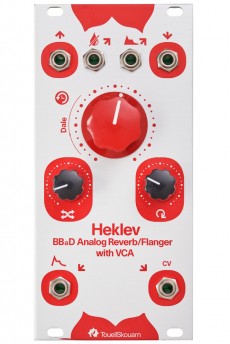 Heklev is an analog echo and reverb module, which can also be used to create chorus and flanger effects.

It is based on MN3007 bucket brigade devices. Besides the actual effect block, there is a built-in VCA.

The Heklev's beefy sound character is remindful of renowned vintage effect units. The Heklev comes equiped with three potentiometers to adjust delay time and feedback of the BBD circuit as well as the mixture of dry and processed signals. A CV input allows the user to modulate the echo’s rate. The results are sent to the VCA, which can also be influenced by control voltages.

Heklev offers three outputs. They emit dry and mix signals of the effect block as well as material coming from the VCA.

On the circuit board of the Heklev, there are five trim potentiometers. These control elements make it possible to adjust input and output volumes, the BBD bias, noise canceling as well as the range of the echo time knob.