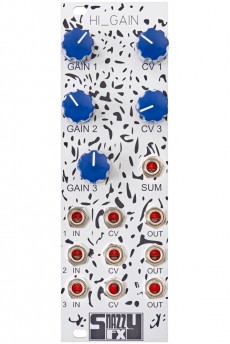 The Hi_Gain is a specialist for wavefolding, distortion, saturation and the like. The module features three transistor-based VCAs plus a sum output. With daisy-chaining and feedbacks, very complex effects can be achieved.

The VCAs come equipped with the following connectors and control elements:

Stage 3 – This stage gets louder with negative signals and quieter with positive ones.

The sum output emits a mixture of all three VCAs. More precisely, the mix channel considers the results of the first two VCAs as “normal” signals and the third stage as a “DC point shifting” input. The phase of the sum output is inverted. Interesting cancellations can be achieved by mixing audio material coming from the single outputs and the sum connector.