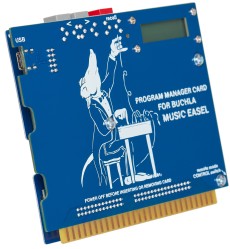 The Program Manager Card is the stage and studio’s best friend for the Music Easel!

The Program Manager Card is a preset sound control and storage system for the Buchla Easel Command 208C and upcoming Buchla Music Easel. It comes in a compact package, reminiscent of the original bare circuit boards used to make presets for the original 1973 Music Easel. It implements a USB-C connection, with memory for 48 presets, three-button presets selection and recall system, and works with software for macOS and Windows. This is, of course, a vastly improved system over the original bare circuit board program managers, which required soldering of specific resistor values to achieve repeatable results!

The Program Manager Card works in conversation with the software. Sound designers and musicians can program their Easel and Easel Command synthesizers from the computer and save the presets to the Card. The application also serves as an endless sink for infinite presets and preset banks, and a hub for importing and exporting presets and banks to share with others. With computer precision, it’s possible to tune the parameters in ways that simply can’t happen by hand on the front panel controls. Additionally, each virtual banana jack in the app can be scaled, even to inverted values - for example, the  “timbre CV control” cable can be scaled to “-1,” directing timbre to go down instead of up.

The Program Manager Card is compatible out-of-the-box with the Easel Command 208C and upcoming Music Easel. It can be used with the 2013-2017 Music Easels with a DIY modification to the card’s connectors or to the Easel itself.