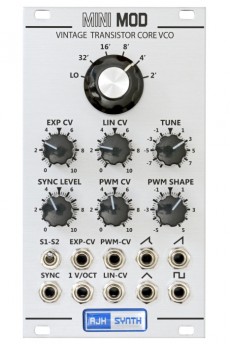 Faithful analog emulation of the VCO from the very first series of the Minimoog of which less than 300 units have been built.

Just like the original the module is also built entirely discrete with transistors, yet due to improved circuitry the really bad temperature stability of the Mk1-Minimoog is history. The sound is the same and the module features some modifications like PWM.
This VCO is not only interesting for Minimoog fans because it offers all of Minimoog's waveforms at individual outputs, also the "sharktooth" wave. There are two selectable types of sync with controllable intensity. Besides exponential FM we also find linear FM.
Another addition is the manually and voltage controllable pulse width modulation; it wasn't implemented in the Minimoog and you were only able to select between fixed pulse widths. The octave switch allows for setting the VCO in LFO mode and with negative CVs at the inputs it can oscillate pretty slowly. The AJH MiniMod VCO can read internal CVs via the Doepfer Buss as long as no cable is inserted to the 1V/octave input.
The VCO is not oriented on later Minimoogs which partially used op-amps or transistor arrays with FET amplifiers - in this case the very early and rare Model-Ds are of interest which had transistor based VCOs. The bad temperature stability which was caused by a design flaw in the CV summing stage was revised by AJH Synth. That means the oscillator sounds like it's supposed to and its frequency remains stable.