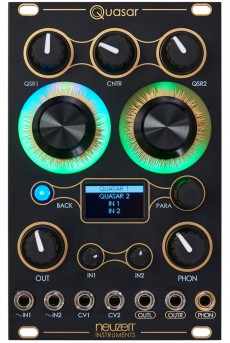 Quasar brings 3D spatial audio to the Eurorack world. It is a two-channel audio mixer that uses binaural algorithms. You can seamlessly move sounds around your head, dynamically change the angle, height and distance in real time.

Quasar creates a 3D sound image by binaural audio processing. Two positions named Quasar 1 and Quasar 2 are available, which you can virtually place and move at any angle, height and distance around your head. Room reverb can be added as a further aid to distance perception. The audio signals at input 1 and input 2 can be flexibly routed to either or both positions via an internal matrix mixer. The coordinates of the positions can be set manually or be modulated by internal LFOs or external CVs. For example, you can have sounds orbiting around you, coming from above or below, front or back, and moving toward or away from you. Likewise, a center position is available as a routing destination that leaves the signal without sonic processing to create a dry/wet mix.  Quasar features two CV inputs which can be flexibly routed to any target inside the module. In fact, each CV can have up to four different targets, which enables a very flexible design of auditory 3D-scenes.  Internal LFOs can be used to add dynamic movement and to create spectacular three-dimensional scenes. There are a variety of standard and advanced waveforms that can be routed to the position coordinates. LFOs can also be triggered and reset by external CVs.

Quasar can add some reverb to the signal. While not being a reverberation module in the first place, Quasar's reverb can improve distance estimation, but also be used to create impressing ambient stereo soundscapes. All inputs also have digital high and low pass filters, so you can decide which frequency bands go to which position. However, in addition to Quasar 1 or Quasar 2, you can also route the audio to the center position. The center position takes the input signal and distributes it equally to the left and right ears without further processing. For example, you can route the low frequencies to the center position and have the higher frequencies distributed to the outer positions Quasar 1 and Quasar 2. That way, the bass stays centered and mono-compatibility is preserved. As soon as a three-dimensional virtual scene has been created, it can be saved to the module's preset list. That way, scenes can be recalled at any time. Quasar also features some factory presets as a starting point and to show off the module's capabilities.

Quasar works best with headphones, as the algorithm basically mimics the shape of the head and the pinnae, which are responsible for our directional hearing. But even if you play the sound through speakers, you will hear a significant difference from classic panning. As spatial hearing is a psychoacoustic effect that everybody perceives in a slightly different way, Quasar offers several transfer functions for different ear types to choose from. This way, the intensity of the 3D effect can be adjusted to personal needs and fits with the processed audio signal. With its large aluminum knobs, LED rings, rubber potentiometers and mechanically solid components, Quasar is fun to use and invites creative work.