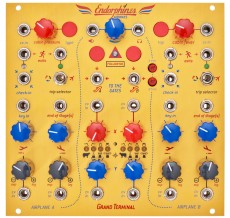 The Grand Terminal is a digital multipurpose module. Its two function generators can be used as envelopes, LFOs or VCOs. The 2 filter channels individually offer 8 modes of operation, and combined with its mixing and routing capabilities and a multi effects unit, it is not only a complete back end of a synth voice, but can also be used as a synthesizer voice, stereo filter bank or general purpose sound effects processor.

The Grand Terminal is based on an ARM M4 DSP, audio resolution 48 kHz/16Bit. Its two filter channels can be used in parallel or serial, and there is a link mode for stereo operation. The Audio inputs have individual trimmable gain stages to integrate the Grand Terminal into different production environments. There´s a soft clipping feature in order to prevent unwanted distortion. Gate A is normalized to Gate B for easy parallel processing.

The built-in multi effects processor features eight algorithms which can be altered in 2 crucial parameters and a possibility to crossfade between the dry and the effected signal. Its algorithms are: Hall Reverb, Shimmer Reverb, Room Reverb, Spring Reverb, Ping-Pong Delay, Tape Delay and Chorus. At the end of the audio path, there´s a Master Volume Control as well as one Mono and one Stereo output.

The two function generators can operate as AD or AR envelopes. All time parameters can be set between 1 ms and 10 seconds, manually as well as via CV. The envelopes can be individually set to loop and then act as LFOs or VCOs (following V/Oct for about 6,5 octaves). They also feature End-of-Stage Outputs.

When used in connection to the Gateway, all controls which are normally set by jumpers on the back of the module are accessible from the Gateway´s front panel.