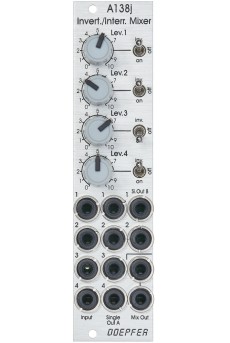 Module A-138j is a four channel mixer with an additional polarity/mute switch for each input. In the upper position of the corresponding switch the inverted signal is used. In the center position the input in question is turned off (mute) and in the lower position the "normal" (i.e. non-inverted) signal is used. The inverting of signals is used especially for control voltage signals (e.g. LFO, ADSR). But even for corellated audio signals this feature is useful. For example for feedback applications or the mixing of original and processed signals (e.g. original and filtered signal to obtain new filter types).
Channel 1 features in addition an Offset function: provided that no plug is inserted into socket Input 1 control Lev.1 generates an adjustable DC voltage (positive or negative depending upon the position of the polarity switch).
On top of that the module is equipped with two types of single outputs and a dual mix output.  All inputs and outputs are DC coupled. Consequently the VCAs can be used to mix both audio and control voltages.
Each input is  - apart from the polarity/mute switch - equipped with a linear attenuator. The amplification range is 0....1.
The single outputs offer the attenuated and possibly inverted/muted signal of the channel in question. Two version of single outputs are available:

Based on this flexible structure each channel can be used also individually as attenuator or inverter (i.e. without mixer function).

The output is twice available (two sockets, hard-wired like a multiple).

The distances between the controls and sockets are smaller as for the standard A-100 modules and rubberized small-sized knobs are used. In return the front panel has 6 HP width only. The module is primarily planned for applications where only limited space is available.