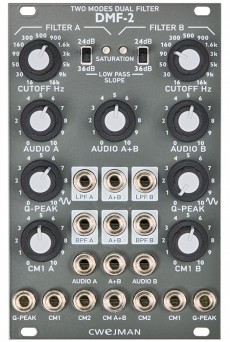 The DMF-2 module consists of two identical filters with two modes: lowpass and a quasi-bandpass which are available simultaneously at separate outputs.

Each filter works selectively with different filter slopes and allows overdriven sound by saturation. By lots of in- and output combinations the module can be used as two independent filters or as a parallel dual filter. Each filter features resonance up to self-oscillation. The lowpass is switchable between the classic 24dB and a 36dB slope, the bandpass is a combination of 6dB highpass and 24dB lowpass.

The volume control sets the audio level at the input up to saturation which grade is shown by LEDs. Additionally to the each filter´s separate sockets there are in- and outputs which address both filters simulaneously or carry their audio signal. Per filter there are two CV inputs for modulation of cutoff frequency (one with attenuator) and one for resonance, then an adjustable audio input and separate outputs for low- and highpass. There is a common CV input which controls both filter´s cutoff frequencies and a common adjustable audio input. Likewise there are combi-outputs for the audio signal of the low- and bandpasses.